Yonder Window Theatre Company presents a delightful production of The House on Poe Street. While the finer points of the story are dubious, the show is beautiful, engaging and strange.

Estate lawyer Mendel Steingold (Gregory Jensen) meets an interesting pair of twin sisters, Argonne and Flourine Seaborg (Olivia Nice and Eliza Shea, respectively), while handling the estate of their deceased mother, Dr. Seaborg. The house is reportedly where Edgar Allen Poe wrote The Raven, and the twins discuss their hopes to turn the old house into a museum dedicated to Poe’s work. They also talk about their mother’s experiments to find an “empathy gene.” She hoped to find create or find a hormone that would rid the world of male aggression by injecting the hormone into world leaders, and men in general. Mendel of course doesn’t find this appealing, and the quirky sisters soon run him ragged with their peculiar demeanor. At their request, Mendel introduces them to his fiancé, Samaria Silverman (Tamara Geisler), and the three ladies become fast friends. Despite his reservations about the twins, Mendel also introduces them to Sam’s brother Lawrence (Gadi Rubin) and his friend, Astin Rutherford (Daniel Light). As they spend more time together, they discover the presence of a ghost who leaves a strange substance in tea cups at night. After an attempt to speak with the ghost through medium Lithia Nickels (Laura Johnston), Mendel’s world begins to crack as he is forced to examine his world view.

The scenic design by Pei-Wen Huang-Shea is lovely. It really brings the parlor of an old house to life – a lived in house full of character and story. In this charming setting, director Katie McHugh makes stage pictures that reflect the characters’ power and peculiarities as they tell their fantastic story.

Olivia Nice and Eliza Shea are the heart and soul of the entire performance. They are lovely to watch. Their timing with each other, and moving and speaking in unison was impeccable. They have such great chemistry, their singing voices are well matched. At several points throughout the show, Olivia and Eliza sing harmonies composed by Sheilah Rae. The lyrics are poetry by Poe and his wife, giving the gentle lilt of the melodies an eerie feel.

Gregory Jensen drives the play with ease, though it is a pity that his character has less and less to offer him as the action of the play moves forward. The rest of the actors do what they can with their two dimensional characters. Tamara Geisler fills out her character rather well. Laura Johnston and Daniel Light both have undeniable stage presence and a knack for the details of their characters.

Fengar Gael crafts an intriguing story and impeccable dialogue, however, most of the play is exposition. While the device she uses to tell the story is successful, it also means that we do not get to see all the action of the two stories we are being told. This feminist sci-fi is told through Mendel’s eyes, and Mendel is a man unaware of his privilege and power – the type of person the Seaborg sisters wish to eradicate. Naturally the characters clash, but because Mendel is telling the story, we follow his plot line. As a result, the climax of the twin sisters’ story takes place in the two months that Mendel is absent. It is odd that we learn so much about the peculiar lives of the Seaborg sisters, yet in the end the story doesn’t really seem to be about them.

Some moments of the play feel unfinished. For example, the result of the séance is the discovery of an oblong box that hold bones, potentially belonging to Virginia Clemm Poe; but this discovery does not propel the plot in anyway. It is like an empty Easter egg – it was so compelling to find it only to understand it doesn’t hold any meaning.

I rather enjoyed the story and the performance, yet I find a bizarre irony in the fact that a story about two very strong female characters surrounded by subpar characters is told from the perspective of a two-dimensional male character. 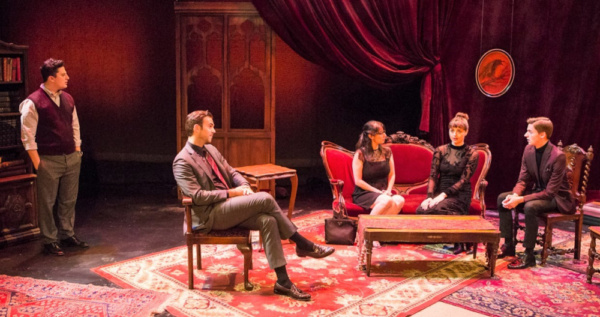