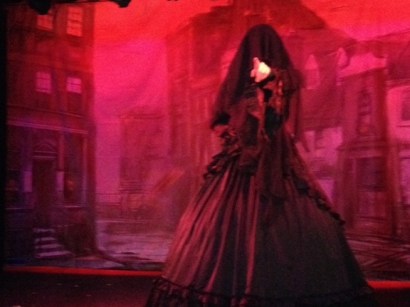 Courtney Hansen as The Ghost of Christmas Yet to Come in a scene from “A Christmas Carol” (Photo credit: Brenda Bell)

“Darkness is cheap.  I like it,” explains Scrooge to the ghost of his deceased business partner during an early scene in this version of A Christmas Carol.  Marley has just spookily entered from a trapdoor in the center of the dimly lit stage. The dynamic, large, bearded, African-American performer, Jonathan Rion Bethea, in a three-piece white suit, and wrapped in the requisite chain, is chilling.

His lecture to Scrooge leads to a Fossesque, eerie, song and dance number where several darkly masked spirits holding chains join him, that is riveting.  Choreographer and performer Emily Madan’s inspired work is also in evidence in several other sequences including equally effective numbers for the wretched duo of Want and Ignorance, and the imagined events after death of Scrooge.

Charles Dickens’ classic novella is being given a delightful and boisterous musical adaptation, presented by Be Bold! Productions and the Players Theatre.  Children and adults will be greatly entertained by this brisk production that captures the spirit of the story with much comedy, drama, and unique musical accompaniment.

The engaging score is mixture of traditional songs such as “Deck The Halls,” “Jingle Bells,” and “Joy to The World,” as well as several fine original ones.  Michael Sgouros composed these, with lyrics by Brenda Bell. 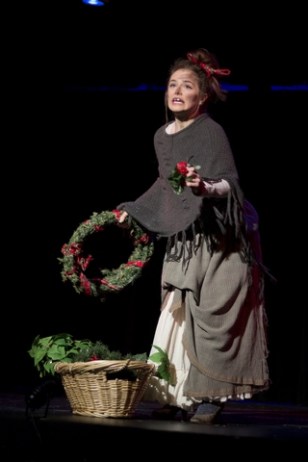 Dressed in authentic-looking Victorian era costumes, the multi-racial cast of 11 adults and 7 children (from a rotating ensemble of 25) are wondrous.  Seeing and hearing them bustling up and down the theater’s aisles, singing carols, banging cymbals, and performing on the small stage with its 1840’s line-drawing London street backdrop, is joyous and truly Dickensian.  Among the accomplished vignettes are a boy in a furry dog costume being walked, and a moving meeting of the young and old Scrooges.

Eric Fletcher’s glorious performance as Scrooge is in the grand tradition of Great Hams such as Monty Woolley, Vincent Price and Victor Buono.  Like them, he skillfully tones it down at the appropriate times to achieve great emotional reality and pathos.

Other standout performances from the company include, Tyler Nye in the dual roles of Scrooge’s nephew and Fezziwig.  With animated facial expressions and vocal delivery he is charmingly comic and effectively dramatic.  Evan Fazziola and Bekah Shade are an earnestly sweet and poignant Bob and Mrs. Cratchit.

Recalling the comedic talents of Tracey Ullman and the persona of Helena Bonham Carter, Brianna Hurley is marvelously droll as “Agy,” and as the spritely Ghost of Christmas Present.  She hilariously begins the proceedings by delivering the kooky, anachronistic, pre-show announcements.  Though phone calls are not permitted, the audience is encouraged to keep their smartphones out to take pictures to post on Instagram, with the hashtag #Agysays.

The mastermind behind this enchanting show is Brenda Bell.  Besides writing the well-crafted lyrics for the new songs, she also wrote the clever book that faithfully embodies Dickens’ sensibility with numerous offbeat touches. She has made it fresh for those familiar with the story, and a great introduction for those who might be experiencing it for the first time.

As the director. she has superbly coordinated all of the production elements, staging, and performances into a beautiful event.  At the performance attended, she also adeptly played The Ghost of Christmas Past with abundant warmth, and was in the ensemble throughout.

Running time: one hour and fifteen minutes without intermission